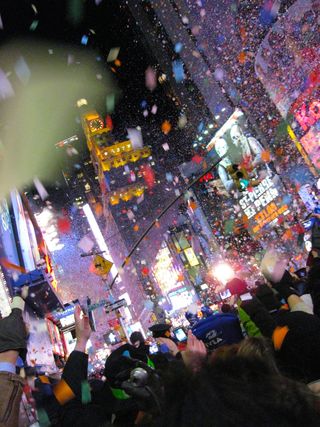 With 2011 rapidly coming to an end, many people already have their sights set on 2012, whether it’s making (and sticking to) resolutions in the new year, reflecting on past goals and making a list of new ones, or thinking about how to approach relationships both platonic and romantic. However, because December is arguably one of the busiest months in anyone’s social calendar— packed with work and social holiday parties, family gatherings, and gift-giving, we naturally put off plans for celebrating the actual turn of the new year until the last minute.

While you’ve probably heard refrains about New Year’s Eve being overrated year after year, what do men and women really think about when it comes to celebrating that night? It’s Just Lunch surveyed a number of men and women who offered their thoughts on going to a New Year’s party, finding a New Year’s date, and getting that end-of-year-sealing kiss at midnight.

We’ve asked ourselves this question at one point or another: do I even need to go out on New Year’s Eve, much less have a date? According to our respondents, the answer is an emphatic “no!” With over 75 percent of men and women saying that you don’t need to go out or have a date on December 31. That said, a slight majority (55 percent) said that New Year’s Eve is an overrated, overpriced night and that saying in and watching TV is a better option than going out.

While people honestly believe that New Year’s Eve is a bit overrated, going out on a regular date or staying in altogether aren’t attractive alternatives either. That’s why a house party is a great option for the last night of the year. You can control how big or how small you want the crowd, it’s inevitably less expensive than going out to a club or restaurant, and there’s an intimate, friendly feel to the evening that is inclusive toward both close friends and newcomers.

Wherever you end up, it’s possible you have a cute date by your side for the evening and inevitably you’ll start thinking about that midnight kiss. Whether you’ve been seeing them for a few months or just met that night, what’s the etiquette when it comes to a kiss?

If you just laid eyes on someone that night and have enjoyed each other’s company, a kiss certainly isn’t out of bounds. While you’ll have to make your own judgment about how the chemistry feels, a kiss at midnight is a fantastic icebreaker for a cozy evening. However, the vast majority (60 percent) of our respondents told us they would still keep a kiss under seven seconds. Remember, if you’re with a group of friends you’ll want to wish them Happy New Year too!

For a couple who has dated over the past three months, you’re probably more inclined to kiss for longer, and our survey results agreed with most saying that a long kiss is completely appropriate. 62 percent of our respondents also agreed that a subtle, reserved kiss is also the way to go at midnight, especially if you’re at a party where cheering and singing of Auld Lang Syne trumps any long make out session.

Magazines and advice columns often say being standoffish or playing “hard-to-get” is an attractive quality in women that men notice. We’re going to debunk that theory. If you’re on a first date, don’t play coy, ladies. This is a chance to get to know someone. You’ve agreed to go on a date with a guy; be kind and approachable and you’ll radiate attractiveness.

Posted at 11:57 AM in Dating Advice, Dating Tips, Relationship Insider, “On the Date” Tips | Permalink

From first impressions, to chemistry and wordplay, there are a lot of little things a person can do to attract the opposite sex on a first date; and most of these can be applied to both sexes. But are there some that may only apply to men or women exclusively? Of course, and that’s why in our It’s Just Lunch Dating Survey, we took a look at the top behaviors that both men and women expect on a first date.  For the men…

Trends and attitudes toward the sexes may come and go, but one thing is for certain, gentleman: chivalry never goes out of style. Treat your date well, and you’re well on your way to landing a second date. Treat her more like your college bud and, well, don’t expect her to sit by the phone waiting for your call.

Our New Year's Eve Survey is Up!