It's Just Lunch Celebrates 22 Years!
Love Contracts: What Are They and Can They Work?

Live-Apart-Ners: Married Couples Not Living Together Becoming a Trend 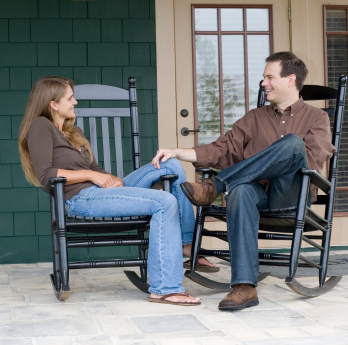 Conventional relationships are starting to lose their charm. For some couples, the traditional idea of marriage, living together and sharing a home for the rest of their lives just isn't practical much less appealing. Some couples desire more freedom and independence in their relationships. In fact, some actually prefer living apart from their lifelong partner rather than living together. An emerging term for this new marriage relationship arrangement has often been referred to as "live apart-ners".

While the notion of married couples living apart instead of together may seem absurd or beyond conventional, this arrangement is actually increasing in popularity with nearly two million couples in the United States choosing to live apart from each other. This arrangement is even more prevalent in Britain where an estimated 1 in 10 committed couples are living apart. Many find this type of living arrangement allows married couples to keep the excitement and freshness of the relationship while avoiding some of the typical issues that may arise when couples are living together. As “live-apart-ners”, couples can be married, but still feel like they are dating when they meet up for a lunch date or go to the movies together.

One of the biggest downfalls of this not-so-long distance relationship marriage concerns monetary expenses. It can be quite expensive to maintain the costs of two homes. This may also be an issue for the children, though some couples have reported that their children enjoy the arrangement and travel back and forth between homes. Another option for some couples is living together for half of the week and spending the other half of the week apart. For those who cannot afford the cost of maintaining two homes, a viable option may also be having separate bedrooms where both parties have the opportunity to be apart and still feel a sense of independence in the relationship.

Marriage therapists are in favor of this arrangement in certain situations, though they do not recommend it for younger couples just starting out. Living apart might work for your relationship if you and your partner both understand and agree upon the arrangement, you trust your partner completely, you both want a sense of autonomy in the relationship, and you have the finances to afford separate homes. It might not work for you if you haven't considered other ways of finding space in the relationship (weekend getaways, separate hobbies, etc.), you do not trust your partner completely, you don't have enough money to live apart, and you aren't ready to make a commitment.

What is your opinion on married couples not living together? Share your thoughts with It's Just Lunch by sending us a message on Facebook!