Talking Points for the Big Game for Non-Football Singles 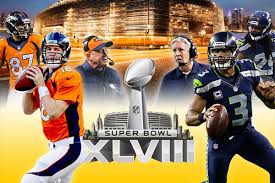 In a recent survey being conducted by It’s Just Lunch of more than 1,400 singles thus far, most men (43.8%)  prefer to watch the game from the comforts of their own home--even if it mean hosting their own Super Bowl party so they won’t have to stray far from the TV unless its for one of three things: beer, food or the bathroom. On the other hand, women (44.7%) are most likely to end up at that very Super Bowl party since they’d rather watch the game in a social setting where they are most likely to meet other potential singles. However, a good majority of men will be far too absorbed into the game to bother with socializing so It’s Just Lunch has come up with a few great talking points for non-football singles to socialize with their football-loving counterparts without detracting from their Super Bowl-watching experience.

Have you ever heard your favorite quarterback yell out “Omaha” during a football game? Peyton Manning isn’t the first quarterback to do it, but he’s certainly the one getting the most attention for it, according to North Jersey Media Group. As it turns out, the Greater Omaha Chamber of Commerce organized eight businesses that each donated $100 for every time the quarterback yelled “Omaha.”  So far, he’s said it 31 times for a grand donation total of $24,800. In fact, a local zoo in Omaha even named a penguin after the Broncos football star, Peyton the penguin. According to several sources, it’s all part of a clever marketing ploy to help drive tourism to the largest city in Nebraska, which happens to be Omaha.

Did you know that Seattle’s Derrick Coleman is legally deaf and the first of his kind to play in the NFL? The media is calling his story the best Super Bowl story of the year after a heart-felt exchange of letters via Twitter with a hearing-impaired 9-year-old Seahawks fan. When the young girl’s father shared an image of a letter she wrote to Coleman calling him an inspiration, the athlete responded back with an image of his own hand-written letter that said, “Even though we wear hearing aids, we can still accomplish our goals & dreams.”

Another great fail-safe talking point is which team you think will win and whether a good offense or good defense wins more games or championships. According to the Singles & The Super Bowl survey, 51.3% of men and 41.2% of women polled want the Denver Broncos to win while only 21.1% of men and 18.2% of women want the Seattle Seahawks to win. With the NFL’s best defense team and best offense team pitted against each other, this year’s Super Bowl should make for a particularly exciting game to watch. Which team are you rooting for? Join us on Facebook to get involved in all sorts of discussions relevant to singles.