Do Sports and Dating Mix? 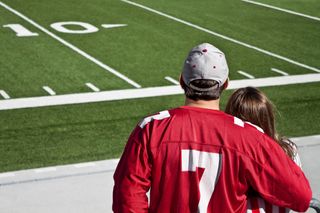 No doubt, men and women across the country will sit down next weekend to watch the Super Bowl together. For many, it might be the only time of year they enjoy a sporting event together. For others, however, sports are an important part of their life, and they want a partner who can enjoy sporting events with them.

It’s Just Lunch, a matchmaking service for busy professionals, conducted a survey of over 1,400 people to determine the role sports plays in relationships. The results of the survey suggest that the younger you are, the more important it is that you have sports in common. Here are some of the most interesting results from the survey:

Nearly one in every five people in the survey said sports have negatively impacted a relationship in the past. That number rose to one in every three people when looking at the 18-24 age group and dropped down to one in ten with those aged 55-64. Women were more likely to say the issue was the amount of time and money spent on sports, while men were more likely to admit that a bad mood after a “crappy game” caused the fight.

The younger someone is, the more likely they found it important their partner be interested in sports. Twenty-five percent of 25- to 34-year olds indicated their partner must like sports and be willing to go to and watch games, whereas only 10 percent of 55- to 64-year olds felt the same way. Overall, 59 percent of men and 43 percent of women wanted a partner who would watch a game or go to a game every once in awhile.

Younger people are also more likely to spend an entire Saturday or Sunday in front of the television watching college or NFL football five months out of the year. Forty-one percent of 25- to 34-year olds said they’d rejoice if they learned their partner spent their weekends this way, because that’s how they like to spend their weekends. That number plummeted to 16 percent in the 45-54 age group.

More good news for sports teams: 84 percent of people said they’d be willing to use vacation time to travel to a sporting event with their significant other. Fifty-three percent of both men and women said they’d be ok if it was just once for a big event, and 31 percent responded with the more enthusiastic: “When do we leave? I’ll pack my bags!”

Have sports ever been an issue in your relationship? Check out our tips for making it through football season together, which can easily be applied to any sport!

totally agree they must mix ,The younger someone is, the more likely they found it important their partner be interested in sports

Very true...they must mix for the encouragement the other partner gives

I think also that sports and dating is a perfect match.

Writing, like great art requires much more than knowledge and education. A great writer is born as opposed to ""made"" and you are a great writer. This is excellent content and interesting information. Thank you.
Visit us: http://lovedatingout.com/

This is only a preview. Your comment has not yet been posted.

The letters and numbers you entered did not match the image. Please try again.

As a final step before posting your comment, enter the letters and numbers you see in the image below. This prevents automated programs from posting comments.

Having trouble reading this image? View an alternate.

(Name and email address are required. Email address will not be displayed with the comment.)