Men: Gift Advice for the Woman You're Dating
New Year's Resolutions for Dating: Diet and Fitness

Shape Up Your Love Life in 2015: The Top 3 New Year's Resolutions for Daters

Party hat on and glass of bubbly in hand, you watched the ball drop and rang in the New Year.  But without that special someone to smooch at midnight, something remains amiss as you greet 2015.  Hoping for a different scenario next year?  Follow the "3 R's"—three dating resolutions that will shape up your love life in the New Year! 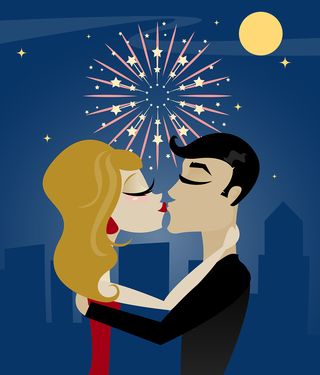 Reflect:  As the calendar turns, pause and take the opportunity to reflect on your 2014 love life.  Too many daters move from relationship to relationship without being sufficiently introspective throughout the process.  Yes, reflection takes some time.  Yes, sometimes we unearth unfavorable aspects about ourselves.  But unless we identify maladaptive dating patterns, we're prone to repeating them.  Tangible Tip:  Select one facet of your love life that must change and stick with it.  Sarah reflected on 2014 and learned, "I realized I date men longer than I should—meaning, I go on five or six dates with a guy, recognize the connection isn't there, but I keep seeing him thinking maybe the sparks will develop.  But they never do.  I end up prolonging the inevitable break-up which makes it harder for both of us in the end."

Reconsider:  Some of us need to reconsider who we go out with in 2015.  We all have an image of our ideal partner but too many daters rule out anyone who doesn't fit their rigid criteria.  Take it from those who've been there, sometimes The One shows up in a slightly different package than we'd expected.  Tangible Tip:  Make a list of the qualities you want in your future spouse.  Dream big and have fun with it!  Highlight the "must have" characteristics—those traits on which you will not bend.  Consider any others to be negotiable.  As Janie explained, "I always said I wouldn't date a guy with kids because I watched my friends deal with too much drama with their boyfriends' children.  So when I found out Eddie had kids I figured our first date would be our last.  But he had every other quality I'd ever hoped for—he's trustworthy, loving, successful, and treats me like a princess—so I married him!  Ultimately, I realized which qualities were imperative and that having kids didn't need to be a deal-breaker.  As a bonus, I learned I like my role as a stepmother."

Reach Out:  If you want your love life to change in 2015, you have to make some changes.  Remember the definition of insanity?  It's doing the same thing over and over again expecting different results.  For those in the dating scene, this means reaching out in a new direction.  Push yourself a bit—nothing ventured, nothing gained, right?  Tangible Tip:  Interview friends whose relationships you respect.  How did they meet The One?  Commit to stepping out of your comfort zone by trying one of the methods that worked for them.  Bob had never considered joining a dating service until he befriended Don and Kelsey.  "They have what I want.  I've never known a couple so perfect for each other and so in love.  I found out they met through It's Just Lunch.  So, I've decided to give it a go."

Ring in the New Year by resolving to follow the "3 R's"—reflect on your patterns, reconsider your criteria, and reach out in a different direction.  Shape up your dating style and see who comes your way in 2015!