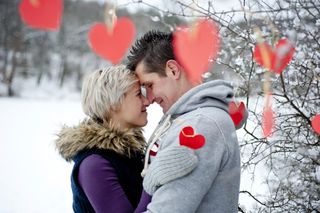 Whether you’re single or in a relationship, you probably downplay Valentine’s Day when asked how you feel about the holiday – at least publicly. No one wants to be that person who embraces a holiday created by the greeting card and candy companies.

As it turns out, Valentine’s Day brings out the hypocrite in us all. In a survey by It’s Just Lunch, the premiere dating service for busy professionals, nearly one-third of both men and women surveyed said they feel “indifferent” about Valentine’s Day, with another 13 percent saying it makes them “miserable” or “dreadful.” Yet, over 70 percent of those same men and women expect to spend Valentine’s Day with someone if they’ve been on four or more dates.

So, let’s face it – you’re probably going to need to acknowledge Valentine’s Day if you’ve been on more than a few dates with someone. Are you feeling that misery and dread now as you worry about making plans and buying a gift? Don’t worry. It’s Just Lunch has you covered with the results of the rest of their survey:

Men and women both overwhelming agreed on their top date choices: dinner at a restaurant with some significance in your relationship or a weekend getaway.

Haven’t been together long enough for those options? The men leaned toward wanting to go to a fancy dinner while the women were more likely to want to have something cooked for them at home.

It’s Just Lunch spokesperson Irene LaCota says split the difference, “Go out for a fancy dinner and then come home to make dessert together where you can kick off your shoes, relax and enjoy each other’s company.”

“Play it safe if it’s your first Valentine’s Day together,” advised LaCota. “If you’ve been on at least a few dates together, make plans together sometime over Valentine’s weekend and invest in at least a card and a small gift.”

For the ladies, flowers are always a popular choice. The folks at It’s Just Lunch wondered, however, if the iconic red roses were seen as generic and devoid of thought and attention. As it turns out, the ladies love them! Fifty-seven percent of women said they love red roses, with only 16 percent thinking they were generic.

Jewelry and plans for a future activity you can do together followed on the women’s wish list.

For the men, a card and a weekend getaway topped their gift wish list . . . right behind one other thing that might not surprise you: sex. Fifty percent of the men chose sex as one of the top three things they were hoping for this Valentine’s Day, while just 22 percent of the women said the same.

If your relationship isn’t at the weekend getaway or romping between the sheets stage, buy him a bottle of something you’ve seen him order, like a bottle of red wine or a small bottle of whiskey. Don’t know him well enough yet to pick out something personal? Consider a virtual gift, such as an iTunes gift card. A third of men said they’d be happy to receive a virtual gift because it would be something they could actually use.