Should You Reveal You’re a Sports Fan to Your Date? 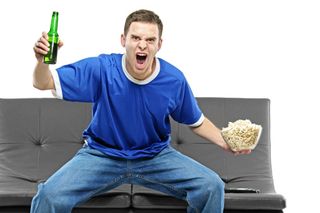 In the midst of March Madness, it appears everyone is a sports fan . . . at least for the month. An estimated 40 million Americans fill out brackets for March Madness – otherwise known as the NCAA Men’s Basketball Tournament – with the average person filling out nearly two brackets, for a grand total of 70 million brackets. That’s more than the number of ballots cast for either candidate in the 2012 presidential election. Sad, but true.

And while you might know to steer clear of controversial topics like politics on your first few dates, you might not think to tone down your interest in sports. A recent survey conducted by It’s Just Lunch suggests perhaps you should.

We’re being serious. Nearly 20 percent of respondents in the survey revealed they’ve had a previous relationship ruined by sports. The younger the respondent, the more likely they were to say sports had sabotaged a relationship, with a staggering one-in-three 18- to 24-year-olds saying sports had gotten in the way.

@SportsBizMiss Broke up with college BF because he didn't include me in Cowboys tickets to a playoff game. #sportsanddating

@SportsBizMiss @ChaddScott I once had to ask a girl to leave my dorm room because she was talking too much during Duke UNC in '98.

Stay away from stadiums and arenas

There’s a reason It’s Just Lunch sends couples to lunch for their first date instead of say a baseball game. It’s a low-pressure atmosphere where you aren’t stuck trying to talk between pitches for three hours.

Not sold yet? Check out the results of our survey: over 30 percent of men in the survey said they’d rather not go to a sporting event on a first date, along with 23 percent of the women. Those who thought it was a bad idea thought it was a really bad idea:

@SportsBizMiss You have to slowly show a girl your crazy sports side, otherwise, it may be your last date with her.

@SportsBizMiss any environment not conducive to talking - like a sporting event - is not a good first date. Plus how do u handle kiss cam?

@SportsBizMiss can't serve 2 masters. Either pay attention to the game or your date.

Gamble on love, not sports

Two billion dollars is expected to be wagered on March Madness this year, with the average person spending $29 per bracket. Whether you’re doing some serious damage in Vegas or throwing money in a jar for the office pool, you might be exhibiting qualities potential mates don’t find attractive.

Nearly one-third of men and women who participated in our survey indicated they weren’t interested in dating someone who bets on sports. Another fifty percent said it depended on the amount of money being wagered.

Our advice? Gamble on love, not sports.

How important are sports?

Despite the somewhat tumultuous relationship between sports and dating, don’t be surprised if sports comes up on the first date, however. Especially if you’re under 35-years-old. Twenty-five percent of 25- to 34-year olds in the survey said their partner must like sports and be willing to go to and watch games. That percentage dropped to 16 percent among 35- to 44-year olds and 13 percent among 45- to 54-year olds.

If you find your conversation turning to sports, remember that most things are fine in moderation. And if you think you might be tempted to watch the game on a television over your date’s shoulder in the restaurant (and scream about how much you hate Kentucky), maybe wait until after the tournament is over to head out on that first date.

Are you still looking for your match? Let the matchmakers at It's Just Lunch help you. Get started today by calling us at 1-800-489-7897 or click here to tell us a little about yourself.