The 3 Biggest Dating Mistakes Men Make (with tips for how to avoid them!) 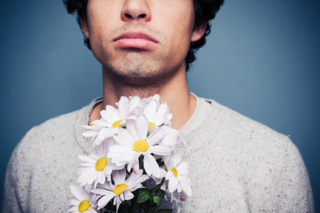 Listen up, Romeo!  Flowers, candlelit dinners, and walks on the beach won't get you anywhere if you're still making these three dating mistakes!  Read on to learn the pitfalls most men stumble into and the easy fixes to pull you out.

Talking About Yourself Too Much.  Here's a little secret, fellas.  Want to impress a woman?  It's easy—listen to her.  Most men approach a date thinking they'll wow us with a litany of successes and accomplishments.  Yes, we know you're trying to impress us and we definitely want to learn about how wonderful you are, but slow it down!  Prattling off your entire résumé in the first couple hours comes across as pompous—especially when you fail to ask your date about her.
Dating Tip:  I've got three words for you:  Listen.  Reflect.  Respond.  Women are way more impressed by a guy who talks with her as opposed to one who talks at her.

Appearing Cocky, Instead of Confident.  Few women can resist a confident man—but most detest a cocky one.  There's a fine line between "Oh, he's interesting . . ." and "What an arrogant, self-absorbed jerk!"  To complicate matters, guys often have no clue they're coming across as cocky to women because of commonly observed gender differences in communication styles.  The one-upping, interrupting, and posturing characteristic to male speech doesn't typically fly with females.  It works well in "Guy World" but such banter often strikes us as brash and conceited.
Dating Tip:  Ask a female friend or your sister to let you know whenever you come across as too cocky in conversation.  Identifying when you veer off course will give you the chance to present yourself as charming and confident, not annoying and arrogant.

Trying To Play It Cool.  Of course you should take things slowly in the early stages when you're first getting to know each other.  There's no need to rush anything.  But once you determine your intentions, make them known!  Women love being pursued!  Playing it cool only fosters ambiguity in your relationship, which can instigate a cycle of confusion.  If you keep things low key, she may respond in turn by pulling back to protect to herself from getting hurt.  You then interpret her distance as disinterest and begin to lose faith in the long-term viability of what you two are developing.  And just like that, a relationship with loads of potential can tank.
Dating Tip:  Women love a man with a plan.  If you're serious about her, show her!  Pull out your schedule and lock in future dates.  Demonstrate to her that you're making her a priority!

Remember, Romeo, you're not inking a business deal, you're wooing a lady.  Save the bravado for the boardroom and showcase the romantic part of your personality—the side of you that listens well, projects confidence, and goes after what he wants.  Avoid these three major mistakes and watch your love life soar!

Posted at 10:12 AM in Dating Advice, Dating Tips, Singles & Dating, “On the Date” Tips | Permalink